This November marked my 10 year anniversary as a Bergdorf Goodman window dresser, and coincided with one of the sparkliest years of holiday windows to date! The Bergdorf 2015 'Brilliant Holiday' windows were designed in collaboration with Swarovski. An estimated 7 million crystals were used to embellish Bergdorf's scintillating 5th avenue holiday vitrines. According to window director David Hoey 'These windows have everything to do with 'crystals, gems, and jewels.' The street is lined with fantastical scenes including an Amethyst encrusted cavern, a nautical pearl-laden Poisiden, a regal rhinestone royal court, and a glittering fortune teller scene. The windows have gotten much fabulous press this season including glowing mentions in the NY Times, Architectural Digest, and Vogue. Swarovski also produced a short video that reveals a glimpse behind the scenes of the massive team effort that makes these dream holiday windows come true.

On a hot summer day in late August, two 3 foot tall winged mythic griffins and a large shopping bag full of Swarovski crystals descended upon my studio. From there on, I worked around the clock for three solid months jewel encrusting custom props for the Bergdorf Goodman holiday windows. 2 griffins, a blue ribbon, an alligator head, a bear head, 2 baby birds, and a partridge in a pear tree… ;) My studio was fondly coined the 'Sarah Sparkles Super Sparkly Swarovski Sweatshop' with shopping bags full of crystals and glittering props covering the room. The two griffins were commissioned for the royal themed 'Crown Jewels' holiday window. They were the most labor intensive project of the season that required an extensive amount of shading and contoured work. We exhausted Swarovski's entire inventory of the SS30 Gold Dorado and Bronze Shade crystal. These glittering beasts are an absolute must see in person!! Special thanks to my trusted assistants at the Sparkles Swarovski Sweatshop; Abby Hertz, Kayla Jo Berley, Contessa Create, and Timothy Wood. 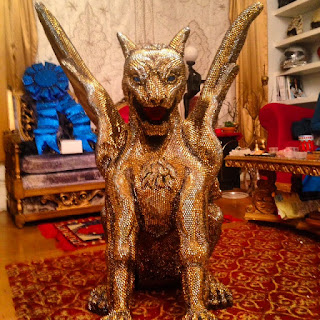 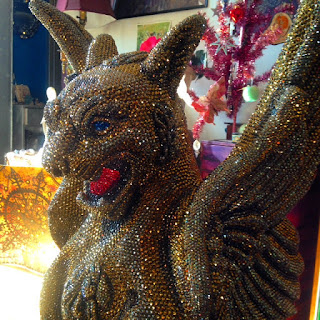 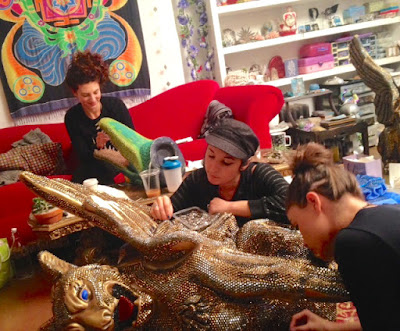 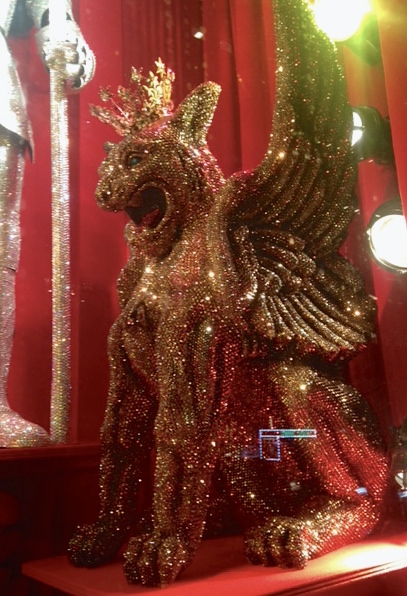 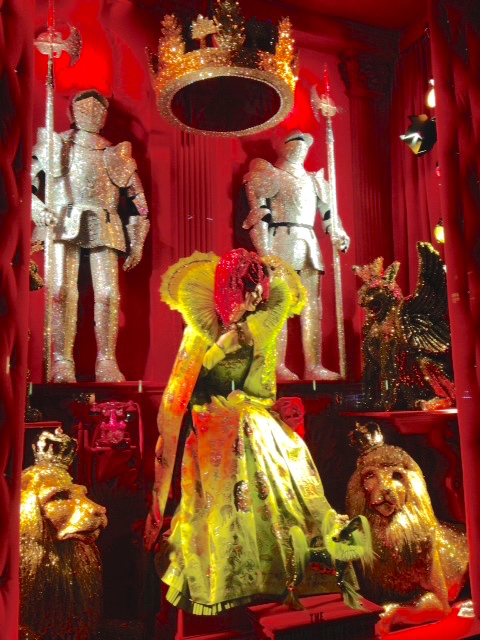 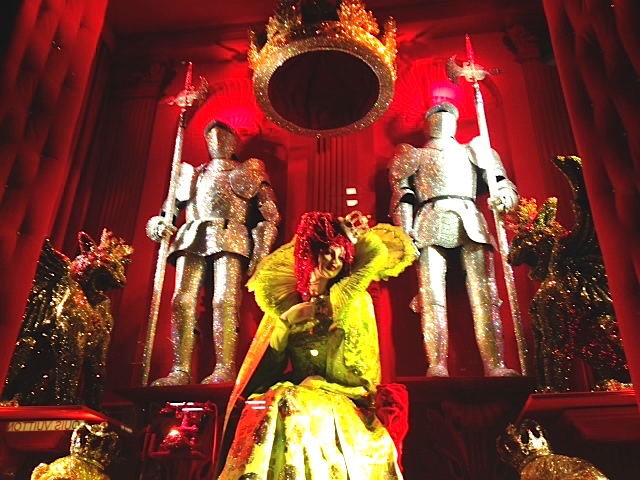 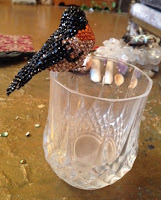 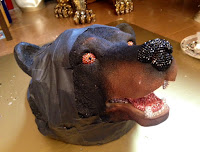 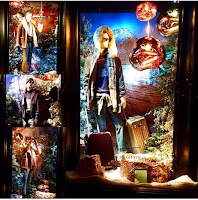 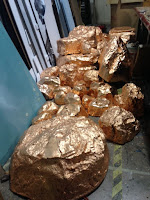 As the pair of griffins for the 5th ave 'Crown Jewels' window neared completion, I acquired additional commissions to embellish a large Blue Ribbon and Alligator head for the 5th Avenue shadow boxes at the women's store. At the Sparkle studio, we affectionately called the blue ribbon 'Baby Boy' and the Alligator 'Ali G the Scorpio.' Though he was the last prop to come in sending deadline pressures through the roof, Ali G was my favorite sparkle project of the season :) 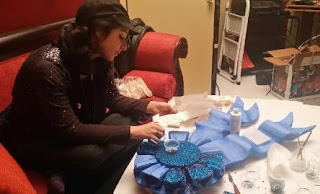 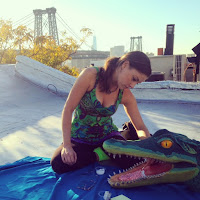 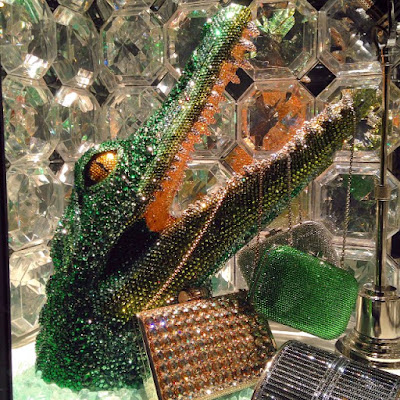 Dreams do come true!!! :) I am so deeply grateful for the opportunity to participate in this dynamic collaboration with Bergdorf Goodman and one of my favorite sparkle mediums of all time- **Swarovski Crystals.** The Bergdorf 'Brilliant Holiday' windows on 58th street and 5th ave are up thru January 4th, 2016. If you are in NYC, go check them out!!! Wishing you all a happy, sparkling holiday season. <3

This October, I took a respite from my glittering holiday window production to work with art director Douglas Little on 'Crimson Peak' windows at Bergdorf Goodman and event decor for Bette Midler's Hulaween party. Noted for his glamorous and other-wordy flair, Douglas conjured a macabre 5th avenue window spectacle in conjunction to the launch of 'Crimson Peak', a newly released gothic horror movie by director Guillermo del Toro. The installation incorporated original props from the film with sets custom built to fit the Bergdorf windows. My tasks included fabrication of spooky candles out of bees wax for the eery bathroom scene and extensive prop styling in the attic window. There was so much detail under the floor boards, that enthusiasts on the street would get on there knees to discover the story beneath the surface; remnants of jewels, scraps of letters, combs, wigs, photos, spectacles, and vintage accessories that once belonged to the mistresses of this haunted house. 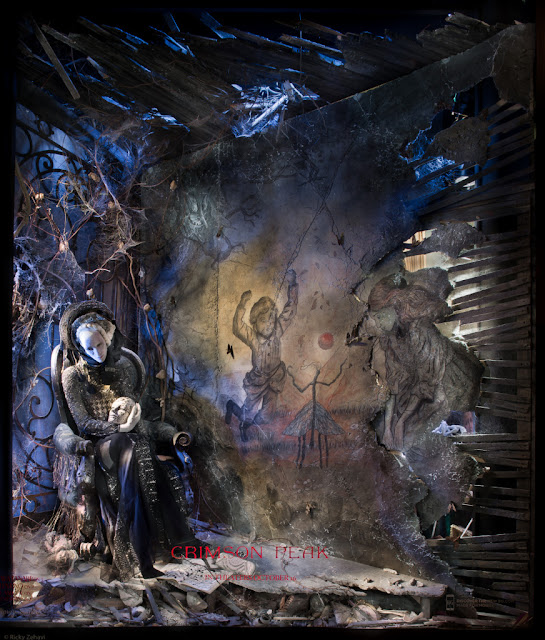 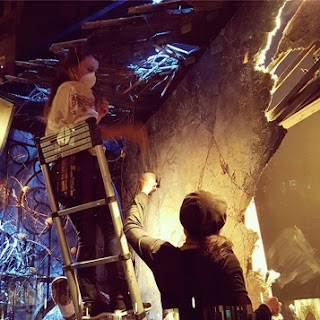 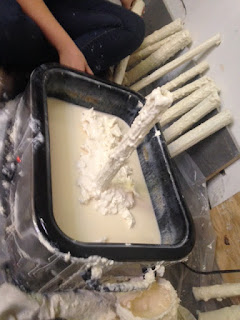 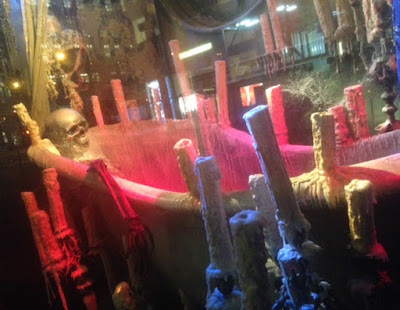 After installing the Crimson Peak windows, my focus shifted gears to working as the decor production coordinator for Bette Midler's Hulaween party at the Waldorf Astoria with art direction by designer Douglas Little. This was my 5th year working on Hulaween, the annual benefit party for Bette Midler's non-profit organization the New York Restoration Project. This years theme was 'Hell Night on Hulaween Island,' with open grave centerpieces on 60+ tables constructed out of mountains of crushed Oreos, painted bones, severed appendages, glitter roaches, and Bette's head in a jar. This year I took on a large portion of the coordination, including sourcing and ordering props, photo printing, tracking shipping (I Hate UPS!!!!!!!!!!) managing the budget, hiring labor, overseeing and executing decor fabrication, and the installation and breakdown of the event in the Waldorf Astoria's Grand Ballroom. What a massive undertaking!! Our install team was fabulous. The event went off without a hitch. So very grateful :) 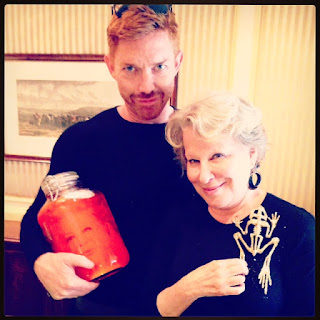 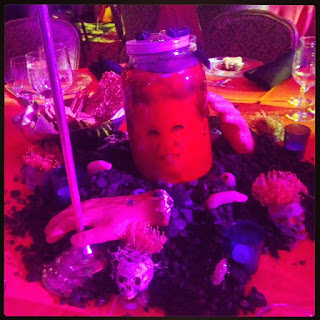 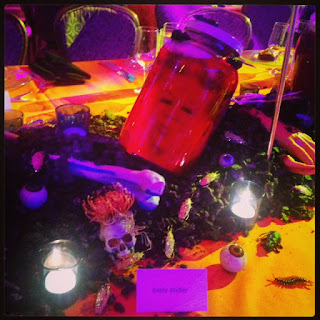 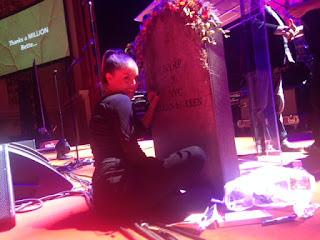 In the aftermath of Hulaween, I spent the remainder of the holiday weekend picking severed fingers out of my personal belongings and recovering in the woods. Gathering my strength for the major final two weeks homestretch of production for the Bergdorf Goodman 2015 holiday windows.
Posted by Sarah Sparkles at 7:57 AM No comments:

Sarah Sparkles
Sarah Sparkles is Brooklyn based designer and production artist for jewelry, accessories, costumes, props, sets and more! For inquiries please contact her at Sparkelina@gmail.com